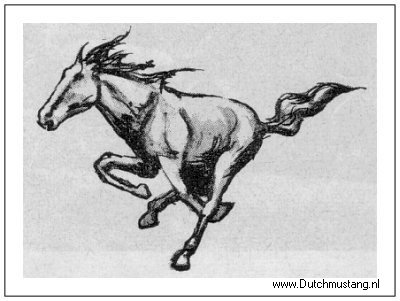 The Man behind the Pony

by Holly Clark and Wolfgang Kohrn

>> Latest News about Mustang I The Mustang I was an experimental mid-engined, two seated sports car aimed at the Triumph/MG market

Since it was impossible to build a prototype very rapidly in Detroit, Ford contracted the job to specialist builder Trautman and Barnes in Los Angeles. Planned around a wheelbase of 85 – 90 inches, Mustang I had an engine of 1.5 – 2.0 litres in a steel tube frame covered by a stressed skin aluminum body. An integral rollbar and fixed seats added rigidity. Although the seats didn’t adjust, the pedals and steering did, mounting on a sliding box member that allowed positioning to suit any driver.

For the Mustang I it was tuned up to 90 BHP at 6500 RPM, breathing through a single throat Solex carburetor. The competition version used two twin throat sidedraft Webber carbs and crossover manifold for over 100 BHP. Mustang I was fitted with a four speed transaxle, it’s brakes were front disks with rear drums and it’s 13 inch magnesium wheels from Lotus England were shod with Pirelli radial-ply tyres. Mustang I was 154 inches long (40 inches high with 5 inches road clearence), rode a 90 inch wheel base, and spanned front/rear tracks of 48/49 inches. A curb weight of under 1200 pounds meant thrilling performance despite the small engine: Top speed was approximately 120 MPH. A low sloping nose housing the spare tyre left little room for a radiator and ductwork, so a pair of diagonally mounted radiators flanked the engine, each with a thermostatically controlled fan. The 13 gallon aluminum fuel tank had a racing style ‘Quick Fill’ neck. The Mustang I made it’s public debut at the United States Grand Prix at Watkins Glen, New York on October 1962, where it was driven around the circuit by race driver Dan Gurney. ‘Car and Driver’ tested the car in 90 BHP form and found it’s 0 – 60 MPH acceleration was about 10 seconds, yet fuel economy was high at 30 MPG. As expected of mid-engined cars, handling was excellent. Exciting as it was, the Mustang I was a false start. Enthusiasts raved, but Lee Iacocca carefully watched general reaction and shrugged. “All the car buffs said, Hey what a car!’ but when I look at who’s saying it – the offbeat crowd, the real buffs …. I said “That’s sure not the car we want to build, because it can’t be a volume car. It’s too far out”.

Early 1962: Lee Iacocca decided that Ford should have a sporty car. Head of styling Gene Bordinat was to consider shapes for the car. John Najjar and Jim Sipple were asked to work on two-seater ideas. Their reult looked promising enough on paper to go ahead with a full-model first in clay. Najjar, an aviation buff, named it Mustang to honour the World War II fighter plane.

May 8, 1962: Roy Lunn and a small group of Ford engineers working in research were authorized to build a “show car” to promote the concept of “Total Performance – Powered by Ford.” Lunn and crew were to have it completed, ready for introduction on October 7, 22 weeks later- 100 business days, not counting weekends or holidays. For the last six weeks, most of the crew grabbed what sleep they could in the shops. The welded tubular space frame was constructed from 1.0 inch outer-diameter tube. Front suspension used traditional upper and lower A-arms with coil-over shock absorbers and an anti-sway bar on a 48 inch tread width. The independent rear suspension used an upper A-arm, similar shocks and anti- sway bar on a 49-inch tread width. A four speed transaxle was fitted with a final drive ratio of 3.30:1

Packed full of features adopted from European racing cars, the two-seater had static bucket seats whose frame actually aided chasis stiffness. To accomodate a variety of drivers, both the steering column and foot pedals moved forward and back a total of 4 inches. Steering was quick, using a 15.0:1 ratio, with 2.9 turns lock-to-lock. Instrumentation was complete and stylish. The 60 degree V4 engine was to be offered in two states of tune for the Mustang. For the street, the 1,500 cc engine was to produce 89 hp at 6,600 rpm and 89 foot-pounds of torque at 3,600 rpm while a racing tune would produce 109 hp at 6,400 rpm and 99 foot-pounds of torque. It was a very simple overhead-valve design, originally destined for Robert McNamara’s pet economy car project, the Cardinal. Roy Lunn presented a paper prepared by Charlie Maddox and Norm Postma to the Society of Automotive Engineers (SAE). Typically, SAE papers are chock full of illustrations, charts and photographs to demonstrate and explain the engineering developments of significance that were accomplished. This package drawing shows placement of key features

Specifications called for a price of $2.500, a 2500 pound curb weight, a 180 inch maximum overall length, four seats, floorshift and the use of mostly Falcon mechanicals. Ford tossed in a marketing brainstorm, probably the key to the entire concept: an arm long option list that would let the buyer tailor the car for economy, luxury or performance, or any combination in between.

Four studios went to work representing Ford and Lincoln-Mercury divisions, corporate projects and advanced design. All were guided by stylist Eugene Bordinat (who was also stylist for the Mustang I prototype) who gave them just two weeks to come up with suitable clays. Seven were ultimately submitted and on August 16th 1962, they were gathered in the Ford design centre’s outdoor viewing area for management persual.

One leaped out from the rest. “It was the only one in the courtyard that seemed to be moving” Iacocca said later. The car looked very much like the eventual production Mustang, but lacked a front bumper. It wore Cougar emblems, though the name was changed to Torino, then Turino as development work progressed. Finally and confusingly, it was labeled Mustang II

In 1963 a running prototype was built and displayed around the country. Like Mustang I, it was first shown at Watkins Glen before the US Grand Prix. Though no-one knew it, they were being treated to a sneak preview of Fords forthcoming sporty compact which was to be known as the Mustang.

The Ford Mustang by William S. Stone. In the 1960s, Profile Publications produced a comprehensive series of profiles for specific cars and aircraft. These guides were always written by a leading specialist of the time and were 12 pages in length. Each issue features colour drawings inside front and rear covers and are fully illustrated with black and white period photos. 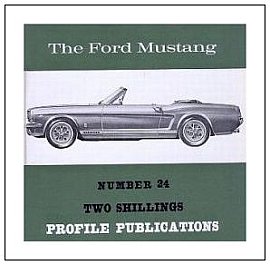 >> Have a look at the Mustang Design Timeline

The first Mustang was assembled at Ford’s Dearborn assembly plant 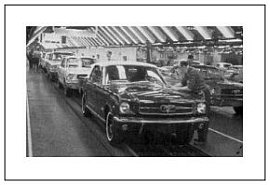 The Ford Motor Company unveiled the new car at its pavilion in April 1964. Lee Iacocca, who became Ford’s president in 1970 and was later Chairman and CEO of the Chrysler Corporation, was behind its concept and design, as well as its dramatic introduction. A lot of planning went into picking the right car for a projected emerging market.

The first generation of baby boomers was turning the age to start purchasing cars in 1960. Research showed these new buyers wanted sportier cars. Surveys revealed that 36% of of the group under 25 wanted a four speed shift, 35% desired bucket seats over full seats, and they were willing to spend more money to order the car like they wanted it. The buyers were more affluent than in the past and a large group of new buyers wanted cars, housewives and teenagers. And the market was huge.

Appealing to old and young buyers, the Running horse brand sold like pancakes at the Ford dealerships. The Mustang was heavily advertised during the latter part of it’s development. On April 16, 1964, the day before it’s release, Ford ran simultaneous commercials at 9:30pm on all three major television networks, ABC, NBC, and CBS. The Mustang had made a name for itself, and it was here to stay!

The 1964-1/2, as it was later called, was available in only two models: the coupe and convertible. Both models featured a lengthened hood and shortened rear deck, chrome wrap-around bumpers, chrome grille with a running horse, and full wheel covers. Both models were available with a 170 cid, 101 horsepower, 6 cylinder engine, a 260-2V, 164 horsepower V-8, a 289-4V, 210 horsepower V-8 and, starting in June, a fire breathing, 4 barrel, solid lifter, 271 horsepower, 289 cid V-8 engine.

The buyer had a choice of a 3 speed, 4 speed or automatic transmission, and a variety of rear end gear ratios. The interior featured “wall-to-wall” carpeting, front bucket seats or an optional front bench seat, rear bench seat, a sports car style steering wheel, floor mounted shifter, and full headliner. There were a total of 121.538 Mustangs produced during the 64 1/2 model run. 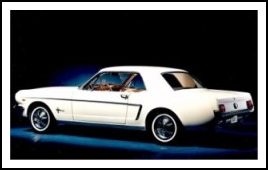 Other changes for 1965 included: an alternator instead of a generator, relocation of the oil filler, integral power steering pump and resevoir (most 64-1/2’s had a remote mounted resevoir), a wire retaining ring was added to the gas cap, the horns were smaller and relocated, and the interior carpet was continued up the sides of the rocker panel and under the sill plate. 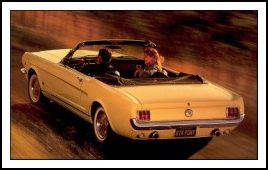 A new interior option was added, the interior decor group (known as the pony interior), which featured special seat covers with running horses across the back, special interior door panes with integral arm rests and pistol grip door handles, five gauge instrument panel, woodgrain steering wheel, and woodgrain appliques on the instrument cluster, glovebox, and optionally on the center console.

Another option introduced in April of 1965 was the GT equipment group. Available only with one of the two four barrel engines, the GT group included five-dial instrumentation, disc brakes, larger sway bars, quicker steering ratio, dual exhaust which exited through the rear valance panel, grill mounted foglights, and special lower body side stripes. A total of 559.451 Mustangs were produced for the 1965 model year. 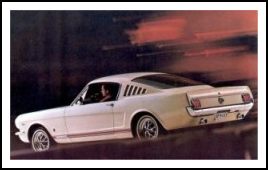 1966 brought even fewer changes than did its predecessor. Most of the changes for 1966 were in the form of cosmetic refinements. A new grille which featured chrome edged, horizontal inserts, replaced the honeycomb grille of ’65. The chrome bars that extended horizontally and vertically from the running horse were deleted on the ’66 grille.

A new three fingered rear quarter panel ornament was used. The lower rocker panel moulding became standard equipment, as did backup lights, and a chrome hood lip moulding. The fuel filler cap no longer included the plastic Mustang emblem insert found on the earlier models. On the inside the Mustang was treated to standard five gauge instrumentation, and “woven” vinyl seat inserts. The choices of available interior colors and styles increased to thirty four varieties, giving the buyer even more ways to personalize “their” Mustang. Production increased to 607.568 units for 1966 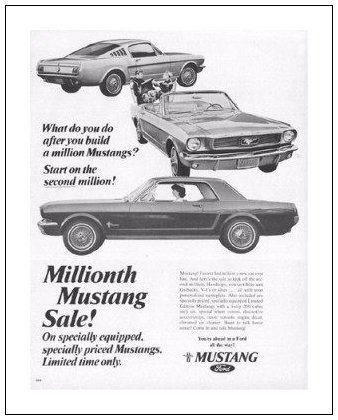